There’s a new place in Torrance for some tasty tempura!

Carlos’ love for tempura begin at an early age when he went to Japan from Peru. It was there that he learned to love tempura and when he went to the United States; his passion for tempura was enhanced when he started working at “Nihonbashi Ten-don Kaneko Hannosuke;” a famous Japanese restaurant that opened up in Torrance.

This year Hannosuke will sadly be closing it’s Torrance shop but Carlos didn’t want the love of tempura in the South Bay to stop and he decided to open up his own restaurant and hence the opening of Tendon Tempura Carlos Jr!

Tempura love can definitely be seen in the cuisine offered here. Their tempura is deep fried in original Koromo batter that is made by precise gram of water and flour. They also only use 100% plant oil and combine it with Japanese sesame oil to fry their tempura. Tendon Tempura Carlos Jr. also has a special secret sauce called Tare/Tsuyu sauce.

Yesterday was their grand opening and I was one of the first lucky 100 that tried their Special Tempura bowl. It had white fish, 2 shrimps, kakiage, seaweed, shishito pepper and half boiled egg! 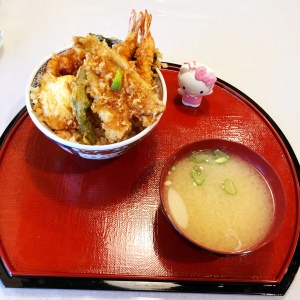 The freshness and overall quality of the tempura was the best. It felt like I was in Tokyo once again.

There is no need to fly all the way to Tokyo however to find tasty tempura because it can be found right here in Torrance! Today, November 2, 2019, Tendon Tempura Carlos Jr will have it’s first full regular day from 11am-9pm.