Donuts for grown ups. One will never quite look at donuts the same way after trying out Blue Star Donuts. 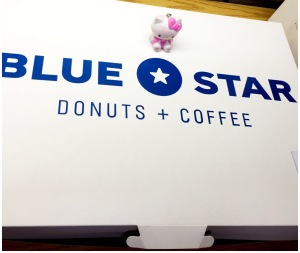 Originating in Portland, Oregon, these gourmet brioche donuts have come to Los Angeles via a new shop in Venice on Abbot Kinney. The dough of the donuts is made fresh daily in a 18 hour labor of love. Ingredients include Shepherds grain bread flour, cage free eggs, hormone free milk, European style butter, rice oil and a special add on that will bring a little bit of an adult flair! What exactly is that that little something something added into their donuts that makes it more adult like? Think bourbon, hard cider, mimosas, olive oil, rosemary….ingredients not typical found in your normal donut. Yes,  gourmet. Yes, different. That is Blue Star Donuts.

I recently had the pleasure of trying out a variety of various of these delicious different donut and I can definitely say they are some thing else.

The first Blue Star Donut I got to try was the Passion Fruit Cocoa Nibs.  At first bite, I could taste instant fruitiness. The passion fruit is very pungent in this donut. 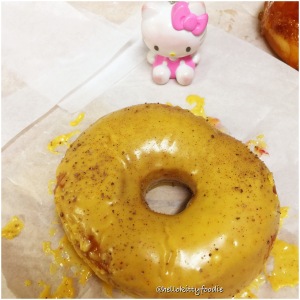 Next up on the tasting menu was the Blueberry Bourbon Basil. This flavor is one of Blue Star’s most popular flavors. I attributed most of the blueberry taste to the bourbon basil glaze on top.

The third donut I tried was the Pineapple Pistachio Pina Colada. It is an exclusive flavor to the LA location and a must try! This donut was on top of my favorites of all the Blue Star Donuts I tried. I loved everything from the fresh pineapple to the thick coconut cream to the Caribbean rum and the touch of California pistachios. It made feel like I was in a tropical paradise somewhere enjoying a pina colada on the beach.

The Mexican Hot Chocolate was my next treat. This is for chocolate lovers. It is very rich in chocolate taste. It has a dark chocolate flavor that would go well with a cup of the Stumptown Coffee that they offer.

The Raspberry Rosemary Buttermilk is one I found to be very different.  This pretty in pink donut had a really strong rosemary aftertaste.

The Chocolate Almond Ganache is another one for chocolate lovers! Similar to the Mexican hot chocolate, this had a dark chocolate flavor. The almond on top was a nice crunchy touch.

For those wanting a more simple, light treat, the Orange Olive Oil Cake is the one for you. I found this donut to be very light and fluffy with the flavors not too strong.

The Cointreau Creme Brûlée was one tasty, unique treat. It has house made vanilla custard, Cointreau syrup and is sweetened with Madagascar canola beans in a pipette. The vanilla custard is packed in the inside of this donut and really brings out the creme brûlée flavor.

Last but not least, I tried their Hard Cider Apple Fritter. I have always loved apple fritters and found their take of apple fritters here true to the classic apple fritter donut. The hard cider glaze and sugar on top along with the crisp donut texture, makes for one delectable donut! 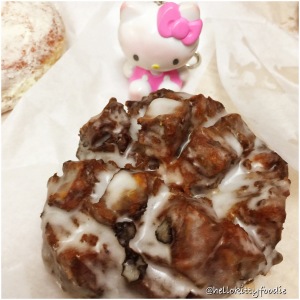 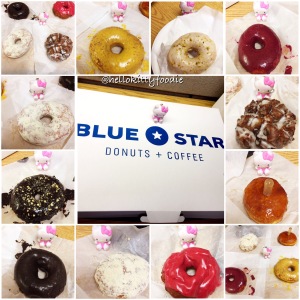