Tim Horton’s in Canada is what In and Out is in California. It’s literally a staple. You can see it spread out in various areas in Vancouver and I wasn’t about to end my Canada trip without trying out some of their goodies. Therefore on my last day in Vancouver, I made Tim Horton’s my last foodie trip.

It was breakfast time and so I tried a egg sandwich with sausage biscuit and a cappuccino. The breakfast sandwich was pretty good! The biscuit bread was so soft! The capuccino was so tasty! It’s had just the right amount of sweetness for an early morning kick.

I got some Canadian maple donuts to-go for my cousin and me for my plane ride later. I’m in Canada so why not pick a donut with Canadian maple?! 😉 The Canadian maple had maple cream on top and I got a surprise when I found little bit of custard filling in the inside. It seems every little food treat in Canada has a maple flavor and this donut was indeed a treat! 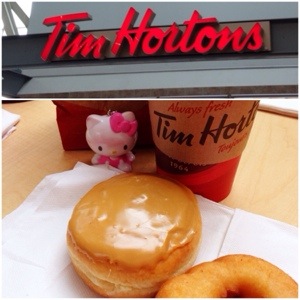 It was nice to finally try out Tim Horton’s! I had heard so much about partly because of all the hockey games I watch. Tim Horton’s would sometimes be a sponsor. 😉 Finally during this trip, I got to try the place everyone talks about!

One thought on “Hello Tim Horton’s”