Recently a new buffet, Kuma Seafood Buffet, opened up in the South Bay and they had a grand opening weekend celebration that included free drinks. This is a great buffet with a good selection of various Japanese hot entrees, sushi and desserts! 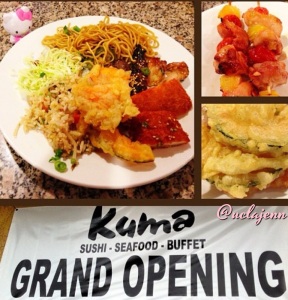 There is an abundant amount of desserts to try here! There are various fruits, cookies, cakes and even ice cream! For the desserts I tried the red velvet cake, chocolate cake, blueberry cake and green tea ice cream. The small cake slices were like little tastes of heaven. The green tea was a distinctly different type of treat not something easily found elsewhere.

I found Kuma Sushi Seafood Buffet a good place to try a variety of both traditional and non-traditional Japanese offerings.